Caravaggio is a genius 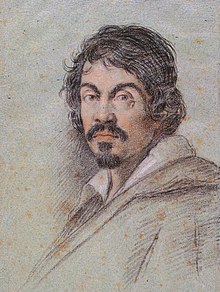 Caravaggio in English, is an Italian artist rediscovered in the 20th century by art historian Roberto Longhi.
Today, he is considered one of the great painters of his time. He disrupted the western world of painting and pushed the chiaroscuro style (light and shade) to its climax. Martin Scorsese considers him “one of our best directors” for his use of the half-figure format (American style shot) and for the violence of his compositions, considered as powerful as opera-style staging. He gave the name to a pictorial trend that has spread throughout Europe: caravagisme.

His life has been the subject of many recent interpretations: cursed artist, murderer, homosexual, crazy cannibal, werewolf, alien etc… and Pasolini’s death on a beach has only added to the Caravaggio mythology.

Caravaggio was a man of his time in his time. A violent and cosmopolitan era. He was a virtuoso, intense, rich artist who had a great erudition and frequented the great names and patrons of his time. He died young, with the promise of a bright future. Unfortunately, a large part of his corpus of works has now disappeared. There are no drawings, or any text from his own hand and his life still includes many grey areas.
The lack of interest of historians from 1650 to 1950 for this master has in particular contributed to the disappearance of archives, works or oral traditions. The most complete source that we have, and which has been the most commented, is the biography made by Giovanni Baglione, who was his enemy. Caravaggio remains a research subject with open prospects for young historians.

What is moving is that it is a cross of stories and it is also to know all the hands that have touched these paintings. We have traceability since the beginning, 1610, exchanges between fantastic characters like Peiresc, Mattia Preti, Lelio Pasqualini and the Pope.

Christian Morand, owner of both paintings

The Martyrdom of San Sebastián 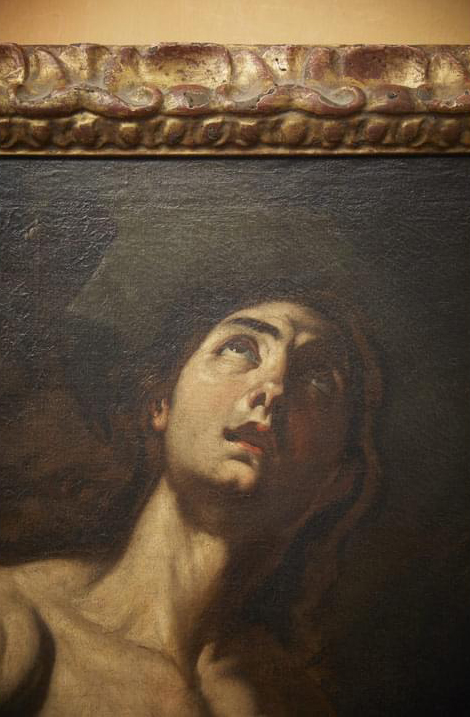 An enlargement of the San Sebastian

Painted around 1610, the Saint Sebastian of Caravaggio would have been destined for the construction of the Roman basilica of Saint Sebastian of Scipio Borghese.
This masterpiece could be defined as the missing link in Caravaggio’s corpus, without doubt originally intended for the basilica of Saint Sebastian of Scipio Borghese. It solves the mystery of the master’s last period and reveals an immediate link with the martyrdom of Saint Ursula, the last known painting of Caravaggio. The painter refers to a painting by his Lombard master Peterzano: the burial of the church of San Fedele in Milan. Caravaggio painted several versions of the martyrdom of Saint Sebastian, described by the biographers of Caravaggio. The musée national des beaux arts de Malte restored in 2012 a copy dating from the years 1630-1637 painted by Mattia Preti, sold in 1694 by Mattia Preti to Fra Pietro Viani, Grand Prior of the Order of the Knights of Malta of St. John of Jerusalem (Order of Caravaggio).
Mattia Preti dies in 1699.

The saint is depicted hwaist high, in a rather unusual pose for this biblical episode. The body presents itself firmly to the light with a play of curve and counter curve. The belly is dug, the breath appears cut off, the skin stretches over the bones. It is the body of a dead person (similar to the resurrection of Lazarus or the two St. Andrew of Cleveland and Back Vega), attached to a dead tree. The trunk, barely discernible, is placed on a rock, with a cavity in its center. This pictorial process is similar to that of St. Francis in meditation, the resurrection of Lazarus, the worship of Shepherds, and other works dating from 1609. 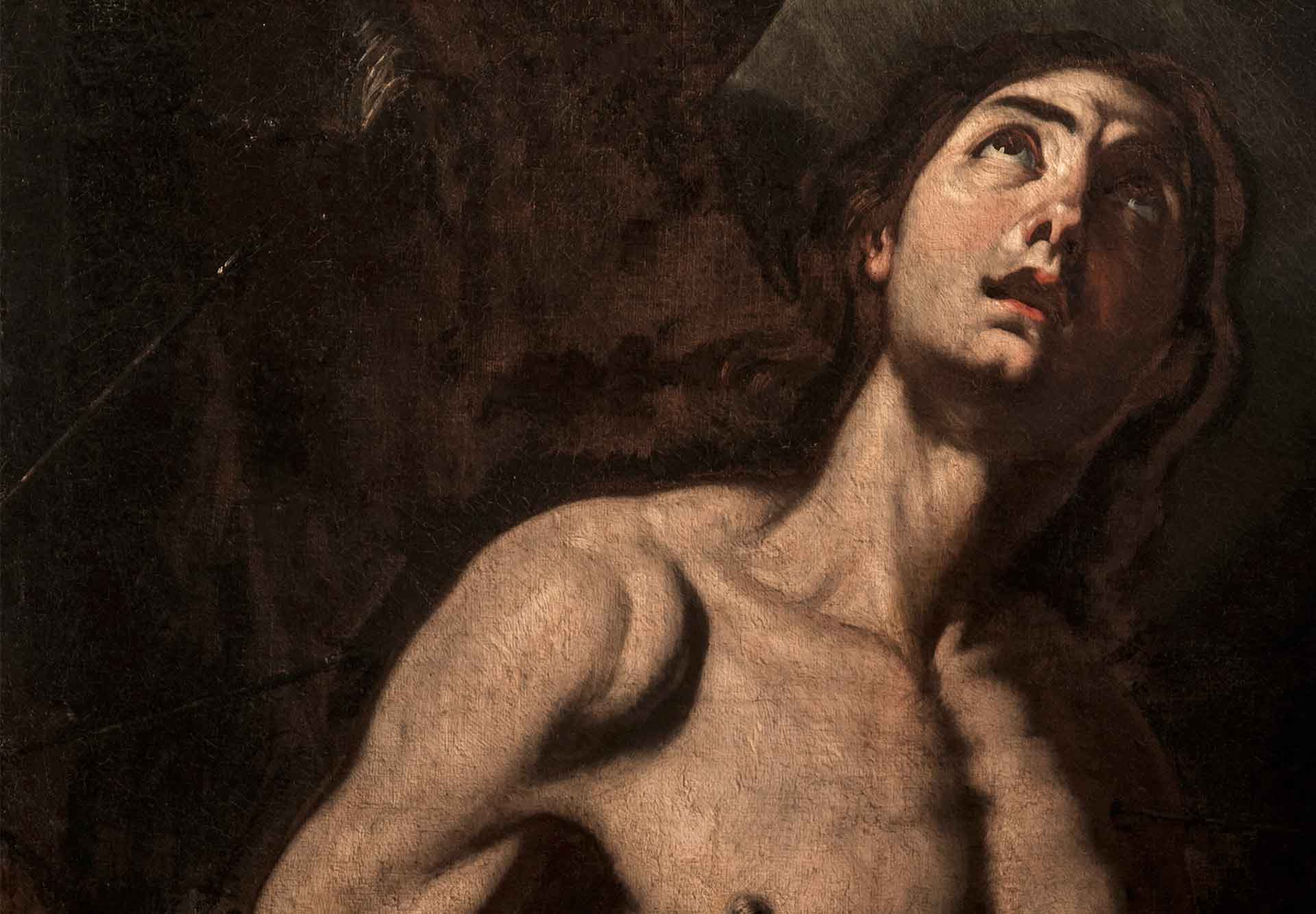 The painting of Forgiveness

Beautifully somber, this painting would appear to be a personal work: a self-portrait of Caravaggio. Painted in haste and anxiety, it would open the doors to the secret intimacy of Caravaggio himself. This painting is known as “the painting of the Pardon” originally intended for Cardinal Scipio Borghese to obtain the Pope’s grace. This painting should have saved the Caravaggio’s life. This is not a first, since in 1606 the painter allegedly offered his Saint Francis (Museo Civico de Cremona) to the Monsignor Prothonotary Apostolic Bishop Benedeto Ala, so that he could interfere with the Pope to obtain his grace.

Caravaggio represented himself as a dancing satyr, taking up the ancient model of the dancing satyr from the A-side of the famous Borghese vase (Louvre Museum). Then, the Neapolitan master decided to repaint and transform his self-portrait as a satyr into a Saint Jerome flagellating himself and receiving the stigmata of a Saint Francis. The painter’s body is the repository of human suffering. The “bad” satyr becomes a “good” saint. Two myths telescoped each other. All the beliefs of the Caravaggio are introduced into a single canvas, a palimpsest mixing sacred and profane.
This identification with the double figure of a holy satyr completes the autobiographical reading of the works, proposed by Roberto Longhi and taken up by the entire scientific community. In addition, religious subjects such as St. Francis receiving the stigmas (destroyed work), St. Jerome or mythological subjects such as the sleeping Cupid, typical of the last period of Caravaggio, enter perfectly into resonance and form a dialectic with the figure of the Pardon.

This painting illustrates an experiment common to Caravaggesque painters, the “figura sola”, an expression of Giulio Mancini to define the ability to represent a single character, often in half figures. In addition, we pose legitimately the question of the use of the term Pardon to designate this painting.

If we refer to the iconological definition of the Pardon by Cesare Ripa, published in 1593 (above), we notice disturbing similarities between this definition, illustration of the term and life of Caravaggio: was he affected by a secret repentance after Tomasso Rannuci’s murder ? The secret is revealed.

The character’s attitude is based on the model of the dancing satyr facing the god Dionysus, from the Borghese vase. On X-ray, the drape of the left arm and thyrse are clearly visible. The ivy ball was replaced by a crucifix, a skull and a bible. A still life of devotion. The dancing satyr has been metamorphosed into a double autobiographical figure of a saint-satyr. A satyr whipping himself like a Saint Jerome and receiving the stigmata of a Saint Francis. Caravaggio no longer addresses Dionysus but the single God, perhaps it is even a direct message to Pope Paul V Borghese himself, his “savior” and patron. The “painting of the Forgiveness” is the symbol of the renunciation of a life of debauchery and lust, as in the sleeping Cupid exchanged with the famous arms dealer Francesco dell’ Antella. The painting is quoted in St. Luke painting the Virgin of Mattia Preti visible in the Chapel of the Mdina Cathedral in Malta painted in 1698-99. Particular attention was paid to the face. The nose has experienced many repaints. It was originally “in a trumpet” shape. 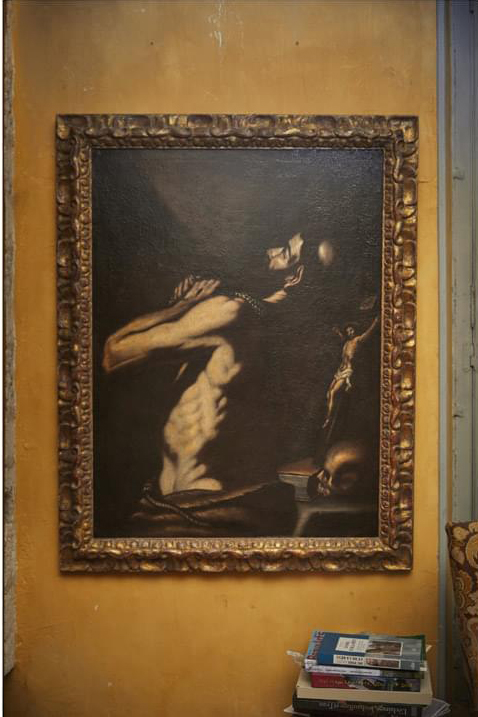 The painting of Pardon - Saint Jerome

The Agar Hotel is open every day
during the exhibition period,
only guided tours reservation
10h30 – 14h – 16h